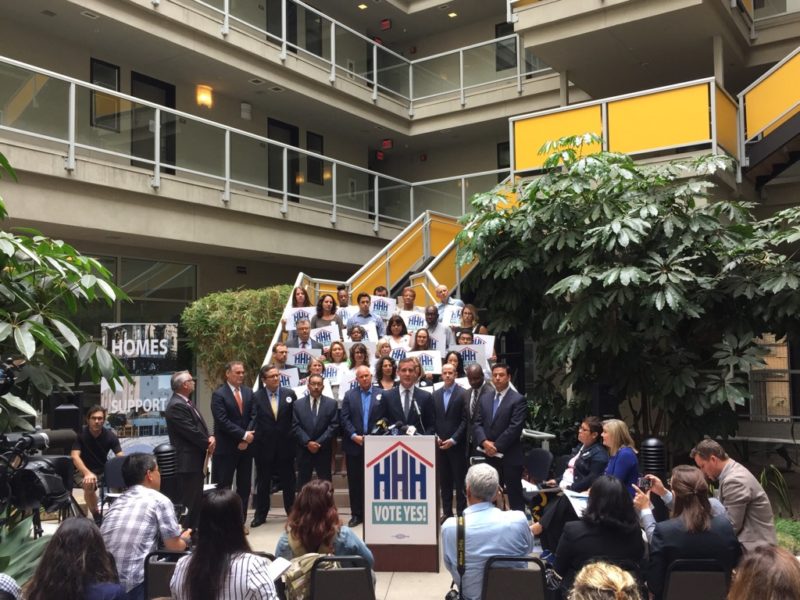 By Dora Leong Gallo, CEO Earlier this year, both the City and County of Los Angeles adopted plans to end homelessness in their respective jurisdictions. Filled with strategic priorities and requests for departmental cooperation, the plans gave all of us who care hope – that finally, homelessness was a priority for our elected leaders.

The plans, however, came with price tags – $2 billion in housing production costs for the City and $450 million in ongoing costs for services provision for the County. Although the County quickly made a down payment of $100 million in this year’s budget to fund a variety of services needs, efforts to place a bond measure on the November ballot to generate ongoing resources to end homelessness failed after several intense and long meetings, despite the County Board of Supervisors’ previous declaration of a homelessness state of emergency and a continuing campaign to get the Governor to make the same declaration.

A few blocks away, the City of Los Angeles managed to put a $1.2 billion Housing Bond on the November ballot, of which 80% will be used to build permanent supportive housing to end homelessness and the remaining 20% will be used for regular affordable housing. Called Proposition HHH, this proposal is an opportunity to finally increase the supply of permanent supportive housing in the City of Los Angeles, where 28,000 individuals are homeless. This bond measure is critically important, because the City only has approximately $26 million this year to develop affordable housing, and not all of it for people who are homeless. Unlike the County, the City has rarely used its own resources to build affordable housing, relying on the federal government for pass-through resources. In FY16-17, the Mayor’s budget includes over $100 million for homeless services, but much of the funding is not new funding or for new programs; in fact, $67 million in the budget will only materialize with the adoption of a linkage fee ($20 million) and sale of surplus city-owned property ($47 million). As a result, Proposition HHH is critical to address homelessness in the City.

On a positive note, the CAO’s office issued an RFQ/P for City-owned sites for housing development, but it is not clear how disposition of those sites will make up the $47 million in the Mayor’s budget. If developers are asked to pay for the land, the result will likely be revenue-neutral for the City (as acquisition cost then becomes a cost of the project, increasing the funds a developer will need to develop affordable housing).

ACOF is competing for these sites and hope to be awarded. We are also actively joining the campaign to pass Proposition HHH. ACOF urges anyone who cares about affordable housing and homelessness to vote this November. There are many important items on the ballot this fall. Don’t lose sight of the measure that will address the tremendous shortage of supportive housing for those with the least resources to end homelessness on their own. Residents of Los Angeles have an opportunity to impact this crisis – we urge you to join us to pass Proposition HHH this fall.